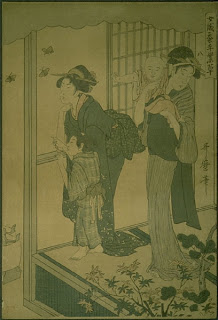 In this day and age, we take it for granted that we can hop on a plane and be in another country in less than a day. Even with all the hassles of flying, it's really no big deal anymore. But, back in the day... back in the day... (no, I'm not going to talk about walking ten miles to school, through the snow...) I mean, back in the time of Lafcadio Hearn, before there were airplanes, before the famous first flight of the Wright brothers, the only way to really get around the world was by ship. And, it wasn't a pleasant journey. One could be overrun by pirates, the ship could be lost at sea, tossed in storms, sunk; it was a rather dangerous way to travel. So, it's particularly remarkable, I think, when someone from the late 19th century went from Europe to America, and then finally settled in Japan. And, then to top it all off, he learned the language and customs and settled down to write and share it with the Western world. Language is not an easy thing. Learning basic phrases for travel is easy, but actually learning a language and the nuances and cultural references take a lifetime. His thoughts on Buddhism as compared to the Judeo-Christian traditions stemmed from an old Chinese proverb. He writes, "I WAS puzzled by the phrase, " silkworm-moth eyebrow," in an old Japanese, or rather Chinese proverb : — The silkworm-moth eyebrow of a woman is the axe that cuts down the wisdom of man. So I went to my friend Niimi, who keeps silkworms, to ask for an explanation." From here, he goes with his friend to see the silkworms and eventually he comes to his musings:

"First of all, I found myself thinking about a
delightful revery by M. Anatole France, in which
he says that if he had been the Demiurge, he
would have put youth at the end of life instead
of at the beginning, and would have otherwise so
ordered matters that every human being should
have three stages of development, somewhat cor-
responding to those of the lepidoptera. Then it
occurred to me that this fantasy was in substance
scarcely more than the delicate modification of a
most ancient doctrine, common to nearly all the
higher forms of religion.

Western faiths especially teach that our life on
earth is a larval state of greedy helplessness, and
that death is a pupa-sleep out of which we should
soar into everlasting light. They tell us that
during its sentient existence, the outer body
should be thought of only as a kind of caterpil-
lar, and thereafter as a chrysalis; — and they
aver that we lose or gain, according to our be-
havior as larvae, the power to develop wings
under the mortal wrapping. Also they tell us
not to trouble ourselves about the fact that we
see no Psyche-imago detach itself from the broken
cocoon : this lack of visual evidence signifies
nothing, because we have only the purblind vision
of grubs. Our eyes are but half-evolved. Do
not whole scales of colors invisibly exist above
and below the limits of our retinal sensibility?
Even so the butterfly-man exists, — although, as
a matter of course, we cannot see him.

But what would become of this human imago
in a state of perfect bliss? From the evolutional
point of view the question has interest; and its
obvious answer was suggested to me by the history
of those silkworms, — which have been
domesticated for only a few thousand years. Consider
the result of our celestial domestication for — let
us say — several millions of years : I mean the
final consequence, to the wishers, of being able to
gratify every wish at will.

Those silkworms have all that they wish for, —
even considerably more. Their wants, though
very simple, are fundamentally identical with the
necessities of mankind, — food, shelter, warmth,
safety, and comfort. Our endless social struggle
is mainly for these things. Our dream of heaven
is the dream of obtaining them free of cost in
pain; and the condition of those silkworms is the
realization, in a small way, of our imagined
Paradise. (I am not considering the fact that a vast
majority of the worms are predestined to torment
and the second death; for my time is of heaven,
not of lost souls. I am speaking of the elect —
those worms preordained to salvation and rebirth.)
Probably they can feel only very weak sensations:
they are certainly incapable of prayer. But if
they were able to pray, they could not ask for
anything more than they already receive from
the youth who feeds and tends them. He is their
providence, — a god of whose existence they can
be aware in only the vaguest possible way, but
just such a god as they require. And we should
foolishly deem ourselves fortunate to be equally
well cared-for in proportion to our more complex
wants. Do not our common forms of prayer
prove our desire for like attention?' Is not the
assertion of our "need of divine love" an
involuntary confession that we wish to be treated
like silkworms, — to live without pain by the help
of gods? Yet if the gods were to treat us as we
want, we should presently afford fresh evidence,
— in the way of what is called " the evidence from
degeneration," — that the great evolutional law is
far above the gods.

An early stage of that degeneration would be
represented by total incapacity to help ourselves;
— then we should begin to lose the use of our
higher sense-organs; — later on, the brain would
shrink to a vanishing pin-point of matter; — still
later we should dwindle into mere amorphous
sacs, mere blind stomachs. Such would be the
physical consequence of that kind of divine love
which we so lazily wish for. The longing for
perpetual bliss in perpetual peace might well seem
a malevolent inspiration from the Lords of Death
and Darkness. All life that feels and thinks has
been, and can continue to be, only as the product
of struggle and pain, — only as the outcome of
endless battle with the Powers of the Universe.
And cosmic law is uncompromising. Whatever
organ ceases to know pain, — whatever faculty
ceases to be used under the stimulus of pain, —
must also cease to exist. Let pain and its effort
be suspended, and life must shrink back, first
into protoplasmic shapelessness, thereafter into
dust.

Buddhism —which, in its own grand way, is a
doctrine of evolution — rationally proclaims its
heaven but a higher stage of development through
pain, and teaches that even in paradise the
cessation of effort produces degradation. With equal
reasonableness it declares that the capacity for
pain in the superhuman world increases always
in proportion to the capacity for pleasure. (There
is little fault to be found with this teaching
from a scientific standpoint, — since we know
that higher evolution must involve an increase
of sensitivity to pain.) In the Heavens of
Desire, says the Shobo-nen-jo-kyo, the pain of death
is so great that all the agonies of all the hells
united could equal but one-sixteenth part of such
pain.

The foregoing comparison is unnecessarily
strong; but the Buddhist teaching about heaven
is in substance eminently logical. The suppression
of pain — mental or physical, — in any conceivable
state of sentient existence, would necessarily
involve the suppression also of pleasure; — and
certainly all progress, whether moral or material,
depends upon the power to meet and to master
pain. In a silkworm-paradise such as our mundane
instincts lead us to desire, the seraph freed from the
necessity of toil, and able to satisfy his every want
at will, would lose his wings at last, and sink back
to the condition of a grub. . . . "

In Ghostly Japan by Lafcadio Hearn
Posted by Elaine at 10:53 PM