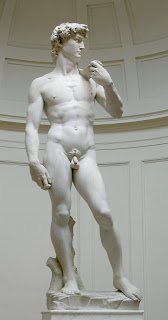 I stumbled upon a very good blog post yesterday by one of my readers, Valentino Valente, a photographer of male nudes. Here's the post. In it, he touches on many issues, namely the taboo of the male nude... as he points out, when we think of nudes, we tend to think of females only, as males are considered pornographic, particularly when shown with frontal nudity. I guess this strikes a chord with me since when I first started out painting nudes, I thought the same thing, but also in the sense that perhaps the prevalence of female nudes in art is because most artists in the past were males. Therefore, they chose to paint females. Also, the female form is supple and sensuous and because of the roundness of form, quite naturally easy to represent, whereas males tend to have more angles, muscles, and length (which makes it interesting in a completely different way, but more difficult to capture in painting). Actually, there was a painting I saw once... can't remember where, I want to say at the Honolulu Academy, but I'm not certain... that depicts a life drawing session with the model and artists in the room. The nude had a cloth sack over her head to hide her identity. Apparently this was the practice of the day; it was considered improper to be nude... yet as far as I can tell, there is nothing like painting from life. Yet, to have nudes exhibited at all these days is an impossibility. No public place here will touch them, often shows specifically prohibit them, in particular frontal nudity, both male and female. But, again, this may be a consequence of geography... for instance, no one would consider Michelangelo's David to be pornographic.
Posted by Elaine at 10:06 PM