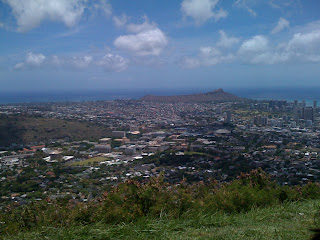 I was feeling a bit down the other day and when I do, I get in my car and drive. Probably that is not a good thing to do, but I like getting lost. Since this is an island, you would think that would not be possible. And though I've been living here nigh on a decade, there are many places I've never seen. It just goes to show how much of a place we don't really know because we are constantly going to the same places day after day... eating the same things for lunch, ordering the same meals at restaurants, buying the same colors when shopping for clothes... definitely we are creatures of habit, too easily we become complacent. There is a road that I can see from my place on the side of the hill with a few scattered houses and I have seen it many times, but had never actually driven up that hill. So, I decided to find it. Of course, there are maps nowadays... and I have google maps on my phone... I could have looked it up, but I think it destroys the spirit of wandering, even if it is in a car. And besides, how difficult could it possibly be? I think I must have driven down every street in the vicinity, hit a bunch of dead ends at the foothills, got turned around. I doubled back to the area where I suspected the road might start, realized that the road forked at that point and that I had taken the wrong path. Finally, I was rewarded with an amazing view of the entire city below me and a dense jungle around me. Life should be like that. We see where we want to be, we head towards it, sometimes without a map, and when we get there it is more beautiful than we ever could have thought possible. I guess the trick is recognizing where it is we want to go.... in my opinion, it actually helps to get lost.
Posted by Elaine at 9:40 PM