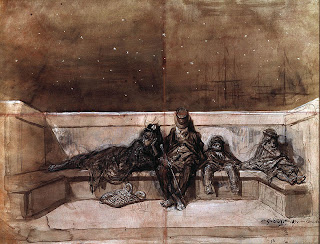 Gustave Dore, A Couple and Two Children Sleeping on a London Bridge

Human beings have very short memories. If it were not for recorded history, we would be entirely lost and real events would become myths, fairy tales, and legend. Recorded history, however, is only possible with a written language. And, writing is made up of symbols. All these things developed only very recently in the entire history of this earth, mere blips on the evolutionary time line. But, our days are spent almost entirely in abstraction. In a very short period of time, we have moved from being physical beings hunting for prey and gathering food to farming (still a very physical endeavor) to a mostly sedentary lifestyle, reading, writing, playing music, doing art, investing in business, operating in a money-based economy... all abstract concepts. Think about it... reading, writing, music, and art are entirely intellectual pursuits. Business, investing, real estate, all forms of money transactions are abstractions, speculations in future potential profit... all of which requires thinking beyond the next meal, planning ahead and seeing a future beyond next week, a sort of optimism and security. But, for those living in poverty, in crime-ridden urban blight, security is not a given. Below the surface of everyday life is the fear of violent death, starvation, disease. In such circumstances, how is it possible to see beyond next week? Are we not then dooming humanity to a dismally barbaric and violent future by ignoring these areas of urban blight?
Posted by Elaine at 10:37 PM