The Lines of Fate 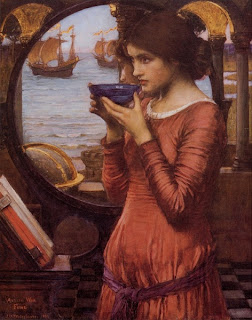 
I have a weakness for things related to the supernatural. Maybe it's not healthy, maybe it's wrong, maybe it's superstitious... or maybe it's because it's real. I was reading Jung the other day and in one of his essays, he told of this "vision" that deeply disturbed him:

"In October, while I was alone on a journey, I was suddenly seized by an overpowering vision: I saw a monstrous flood covering all the northern and low lying lands between the north sea and the Alps. When it came up to Switzerland I saw that the mountains grew higher and higher to protect our country. I realised that a frightful catastrophe was in progress. I saw the mighty yellow waves, the floating rubble of civilisation, and the drowned bodies of uncounted thousands. Then the whole sea turned to blood . . . two weeks passed; then the vision recurred . . . even more vividly than before, and the blood was more emphasised. An inner voice spoke. "Look at it well; it is wholly real and it will be so. You cannot doubt it." Soon afterwards [June 1914] I had a thrice repeated dream that in the middle of summer an Arctic cold wave descended and turned the land to ice . . . the entire region totally deserted by human beings. All living things were killed by frost."

This vision he had was in October of 1913, World War I broke out in August 1914. When war broke out, he finally realized that this dream was a foretelling of this event, of the death of millions of people. He thus conceives of this idea of the "collective unconscious," and that mankind is capable of accessing this connection through dreams. BUT... why does he not then go further and say that these types of dreams are actual prophecies? What I mean is, if people can have prophetic visions, then it follows that future events are already set to occur, that the future is already fated. This, of course, follows a linear view of time, that there exists a past, a present, and a future (as an aside, most language has evolved along this line of thought). However, if we believe in the changeability of the future, then we would have to accept the version of the universe that is split into an infinite number of universes, otherwise known as multiverses or metaverses. By exercising free will and choosing one path over another, there suddenly exists another existence. And, each choice, compounded with millions upon millions of souls... Still, even in this scenario, the existence of prophetic dreams is possible. For instance, what if it were possible to see sometimes these various universes; what if there are people amongst us that possess this gift? The unfortunate thing is that in our modern world, we do not allow for such things. We are comfortable with just one possibility, but alas, one that is not fated. We want to think we are not destined to live out life along a certain path, yet we are also not willing to accept the existence of the multiverse. These dreams and prophecies, even lines of fate inscribed on the hand are deemed the ravings of madmen. Maybe that is why Jung came up with the collective unconscious, because the collective unconscious deals with the present condition of mankind as a whole and not the existence of a predetermined (or completely infinite pre-existing) future... avoiding altogether opening this can of worms.
Posted by Elaine at 7:26 PM