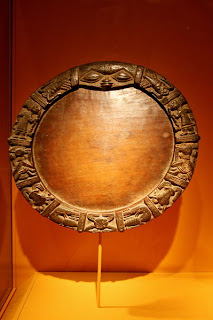 Divination board, Yoruba peoples, possibly Owo region, Nigeria, Late 19th to early 20th century, Wood
According to Wikimedia, "For serious problems, the Yoruba go to an ifa diviner to consult Orunmila, the god of fate. A numerical pattern is obtained and recorded on the divination board. The diviner then recites the verses related to the numerical pattern." Two things. First, that in many cultures, there is the link between numbers and destiny (for example, numerology, birth dates in astrology, certain numbers being cursed or divine, etc.) Second is the pattern. And is that not what physics seeks to find? Patterns? Formulas to predict an action, a mathematical relation to things in the universe. And that is essentially what physics has always sought to predict or divine: the future. I wish someone had put it to me that way years ago. I think I might have chosen to become a physicist. Instead, we were just taught the inane... parts of equations, waves, particles, etc., but never a mention of the real goal, the true reason behind it all. You see, even though we claim to be "modern," and we like to think that what divides us from periods in the past which were fraught with superstitious behavior, the fact is, we are all still searching for the same thing as someone a thousand years ago, asking the same questions. Where does our future lie? Our solution is to go about it in a scientific fashion. We will use those same numbers, but now we plug them into new equations and try to find new patterns. We have not changed all that much, have we? We think that if only we could determine all the variables, then we would finally not be troubled anymore about what lay ahead. But then, where would be the surprise, the fun?

It's a funny thing, in years past, I would imagine something or think, wouldn't it be funny if... and then maybe a little later, that exact thing would happen. It seems strange. When I was about ten, I used to play with the globe in my father's study and I would spin it around and think about the countries in the world. The countries were colored in yellow, pink, purple, and orange. I always thought the smaller countries looked more inviting than the larger ones. They seemed as if they would be more friendly places to visit because you could probably walk around them easily. (In those days, I had also a fantasy of walking everywhere. I even thought it would be fun to be a walking mail person because then I would get to walk in the sunshine and say hello to everyone instead of sitting in an office under florescent lights. I would be outside in the middle of the day while everyone else was locked away at work.) Anyway, the smaller countries seemed more walkable and I wanted to visit these little places and walk around picking wildflowers. One day, I was just spinning the globe and I thought, I'm going to stop the globe and wherever my finger lands, I am going to live there when I grow up. I landed in Hawaii. And, years later, here I am.

Then, years and years ago, one odd day, I was talking to my friend R-- and we were talking about what we would do with our lives and I said, if only I could paint, then I wouldn't have to get a real job... (what a goal..!!)

So... what I mean is, do we make these things happen? I'm certainly not a planner. I don't plan out my life very well at all. In fact, I would say, life happens, opportunities come up, people... arrive. Is that the way of the world? Or is this at some level one's subconscious driving our decisions, however small, towards some direction that we may have wished for long ago?
Posted by Elaine at 12:17 AM