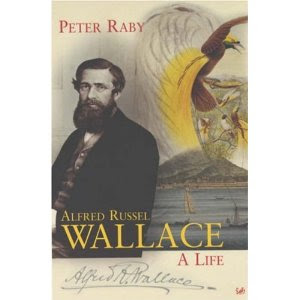 Where to travel to...? I do not have the time or money to travel to any region in the world. Not many people have that luxury, but I was thinking about where I would like to visit in the future and I just realized how much I've changed. I used to dream about walking through deep jungles, looking for beetles for my bug collection and bird watching, kind of like Alfred Russell Wallace, not Darwin, but Wallace. Here is a man after my own heart, studying spiritualism and coming up with spectacular theories about the origins of life. Yet, he is not famous the way Darwin was. Why is that? Was it because of his interest in spiritualism? Did the scientific community reject his work because they thought he was just a bit loony? It is as if he were swept under the rug and became a mere footnote in the history of science. But... anyway, I admired Alfred Russell Wallace and thought I should like to travel as he did, through the jungles of the Amazon and through the Malay archipelago, coming up with all-encompassing theories about life. Certainly, I think that is where science fails today. It is completely disjointed and fragmented. No longer are scientists supposed to even think about theories. They are supposed to work on one minute problem for their entire career... for instance, one might spend one's life studying metabolic rates of emperor penguins or tortoises... And, this is problematic in the sense that one cannot see the forest for the trees. But that is exactly what modern man has become, a specialist in the worst sense, completely missing out on the entire problem because he is so focused on one small minute aspect of this entire universe.

What was I saying.... yes, I just figured that I no longer have the willingness to go through jungles. Suddenly, I think I can no longer endure such things as mosquitoes or humidity. Suddenly, visiting cities sounds more than attractive and being in a cool place is bliss. And, how in the world did this happen? What is it about getting older that makes me less willing to traipse through a jungle? Theoretically, I would love to visit Thailand or Bali or Vietnam, but every time I look at a map, my mind wanders to the cities of Europe where it is cooler and I can get a cup of coffee in an over-priced cafe in the middle of a busy sidewalk. I dream of walking through manicured gardens, looking at marble statues. But... then, what of the wild places? Have they fallen away to an irretrievable past?
Posted by Elaine at 2:31 PM