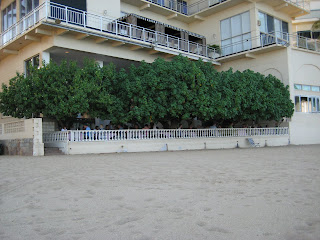 Hau Tree Lanai
I am re-reading Treasure Island by Robert Louis Stevenson. It has always been one of my favorite books... I think I first read it when I was 13 years old during summer break. Back then it was just a swashbuckling, fast read. But what struck me even back then were his descriptions of the land, of the fog, of the sand on the beach, and all that detail about the schooner. Of course, I had no inkling of anything of that sort... I lived in a little suburb in Los Angeles. And even though the ocean was but 20 miles away, it may as well have been 200 miles away. A landlubber to this day... ironic when I think of it, now that I live in Hawaii... and just today sat within a stone's throw from where Stevenson sat under the hau tree, listening to the sound of the ocean beating upon the sand. Maybe it was in such a place where stories wedge themselves in a writer's head to be born later. The vivid descriptions of the landing, the sea, the biscuits could only have come from having lived it. Is that not art? To take something real, perhaps even mundane, and to transform it into something eternal? One could argue that the ocean, the beaches, the sand... all those things inspire... yes, but only one of great imagination could take something we take for granted everyday and find something unique about it. The hau tree where he used to sit is now a place for enjoying a leisurely breakfast... go see it... Hau Tree Lanai off of Waikiki.
Posted by Elaine at 2:11 PM