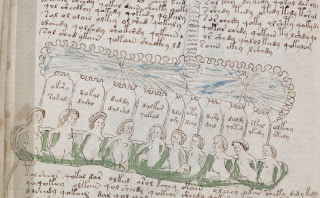 Detail from a page of the Voynich MS

I have been studying the Voynich manuscript for some months now. There is a theory out there that perhaps this manuscript was the work of a mentally deranged individual. While the manuscript is in and of itself quite intriguing it is also interesting to find that so many people
would devote so much to scrutinizing it in the hopes of solving this most mysterious work. Human nature... We need to know the "why.". Why would someone expend so much creative energy to produce something so elusive and seemingly nonsensical? If indeed this were the product of an insane mind, then would not all of us possess such impulses but that we simply have control of our selves? Do we generally lock away such obsessive impulses so that we can exist in the normal world? What exactly drives creativity? Is it simply an unchecked passion artists allow to surface? Part of the manuscript's appeal is our inability to decipher it. I think it would lose much of its allure if suddenly we could read it. Such is the draw of art... The expression of the artist's psyche in material form to be endlessly interpreted, just slightly out of reach.