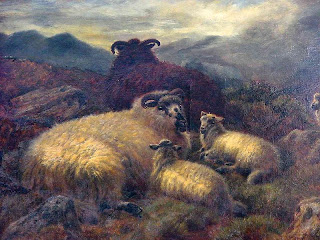 There are many artists out there who advertise themselves as "self-taught" or "outsiders." There are several implications here. First, that their work is unaffected by dogma and is therefore better because it is more emotionally "pure." Second, that their skills as artists are natural talents endowed by nature or god and not by schooling. And, third, that "schooled" artists are elitists. To the first and second argument, if one is to look at art from a historical perspective, art, as with all endeavors, can never exist without influence from the past... that is, art has a linear progression; one can trace the influence of art forms of one period to another. For instance, the invention (or maybe discovery would be more accurate) of linear perspective led artists to draw and paint realistically, imitating nature, giving us artists like Leonardo da Vinci and Michelangelo. Or, conversely, artists may rebel against academic painting and seek movement and light... and we have the Impressionists. Or, emotion might suddenly be of primary importance and we have the Expressionists...The point is that nothing comes from nothing. To the third argument... that "schooled" artists are elitists... this goes to the modern American culture of anti-intellectualism. In fact, you could say that this entire self-taught, outsider phenomenon is a form of anti-intellectualism. It's sort of like saying, one is proud to be ignorant, proud to spew obscenities, proud to be uninformed, proud to be led... proud to be sheep... which ironically is antithetical to what it means to be an artist.
Posted by Elaine at 1:36 PM