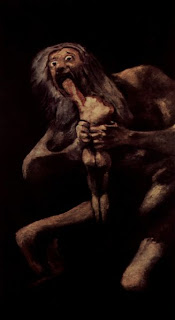 Francisco de Goya, Saturn Devouring His Son
J and I have been friends nearly a decade now, and I must say that is rare, at least for me. I had never given it much thought until the other day when she told me I was cowardly. Okay, I'm not good with criticism, but this one made me really think. She and I are quite alike oddly, even though we come from completely different lives. And she is maybe one of two (maybe?) people I trust not to blow smoke up my ass. She critiques my work frequently as well, gives me food for thought. Yes, cowardly.... hmmm... that, I've not heard before, but then again, our perception of ourselves is often different from another person's perception. She said I was cowardly because I often choose to not love people, to keep them at a distance for fear of.... betrayal?; even with her, it took nearly five years before we were good friends, longer to completely trust that she would not... would not abandon me? I just figured I was a tad anti-social. In this era of instant love as portrayed in films and books, she admitted that she did not love her first husband even when she married him, but that it was only years later that she learned to love him. She said love is both a physical and an intellectual endeavor; physical love is obvious, but intellectual love can only come with time.
Posted by Elaine at 11:25 AM