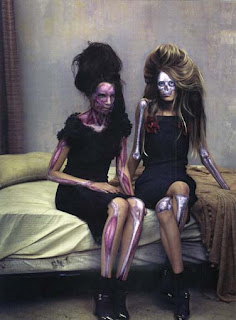 I love the work of Fumie Sasabuchi. She studied at Tama University, located in a suburb of Tokyo called Hachioji. She currently shows at Galerie Zink which has three locations (New York, Munich, and Berlin). The reason I'm writing about her is that I greatly admire her work, but that I've stumbled upon other blog posts about her which say that she is a "he." Now, that's just sloppy research... I mean, first and foremost Fumie is a Japanese woman's name (pronounced Fu-mee-ay)... in the way that the name "Mary" is a woman's name without ambiguity, not like the name "Pat" which can be either male or female. She takes images from fashion magazines and reworks them. Death, beauty being skin-deep, the fragility of life itself are issues that she deals with. They are visually stunning pieces and really, I think speak for themselves.
Posted by Elaine at 5:33 PM